Food is one of the great cultural gifts from the Indian subcontinent to the rest of the world. Largely due to the Indian diaspora around the globe, subcontinental cuisine has graduated from being an exotic niche taste to mainstream appreciation in the last fifty years or so. Part of this success is that behind the alluring flavours of Indian cooking lies an essential, yet rare, wisdom: food is not just one of humanity’s greatest pleasures, nor simply a social bonding mechanism and a way to spread love between people and pass on domestic traditions from one generation to another - though all these are of course part of the picture - but it is also a medicine.

‘You are what you eat’ is our modern saying, but ancient Indians knew this nourishing truth millennia ago. What we eat affects not only our bodies, but our minds also, and so food is a vital, if unrecognised, determinant of how we feel, think and act and thence the sort of life we lead, the culture we fashion and, ultimately, the world we inhabit.

Indian food was always created with a knowledge of the inner qualities of its basic ingredients and the herbs and spices that subtly modulate them. Ayurveda teaches that to be correctly balanced, each dish must combine the five essential flavours (rasas): sweet, salty, spice, bitter and pungent, and, even before we taste the dish, its presentation on the plate should also be pleasing to the eyes, as should the surroundings. Attention to these details will initiate the digestion process even before the food reaches our mouth, ensuring better assimilation of the food and minimising the build-up of toxins in the system.

At a more abstract level, the ancient philosophy of Sankhya that lies behind yoga, teaches that all of material life is a mixture of three basic qualities (gunas): energetic (rajas), dull (tamas) and purity(sattva). These qualities are also found in food, and therefore whatever we eat should always be prepared with a view to balancing out these qualities in the most advantageous way, while ultimately maximising the sattva purity in our bodies, behaviour and life.

Such traditional considerations are becoming ever more relevant in our modern world as day by day poor health, obesity and stress proliferate across the globe. Good food - well-prepared, sustainably sourced, humanely farmed and enjoyably consumed – is no longer a luxury, but a necessity. 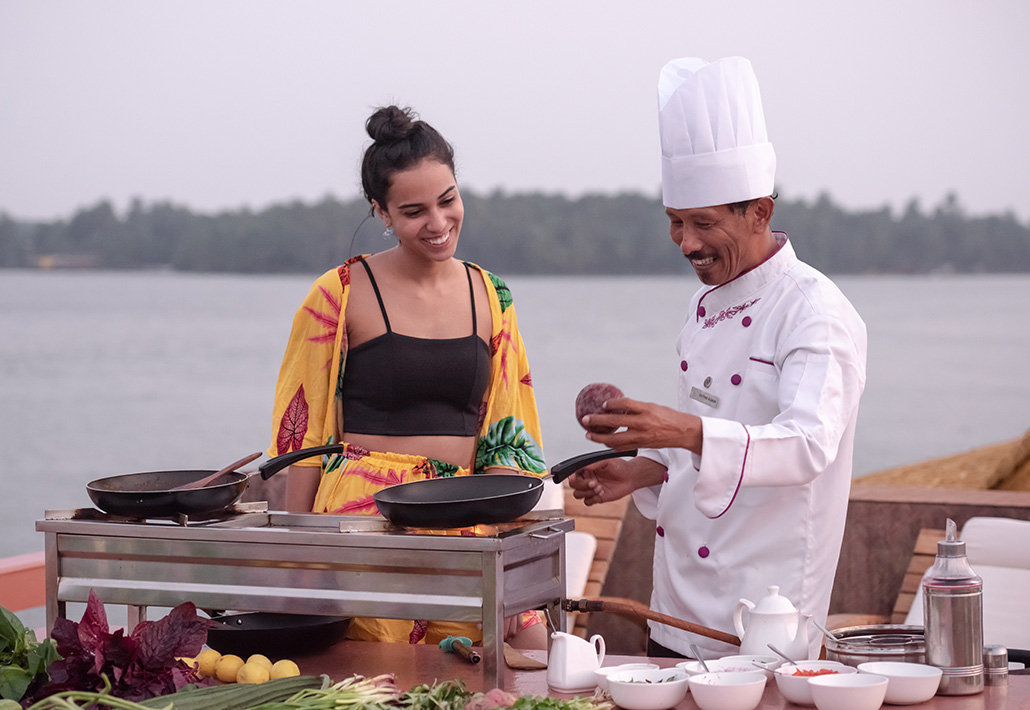 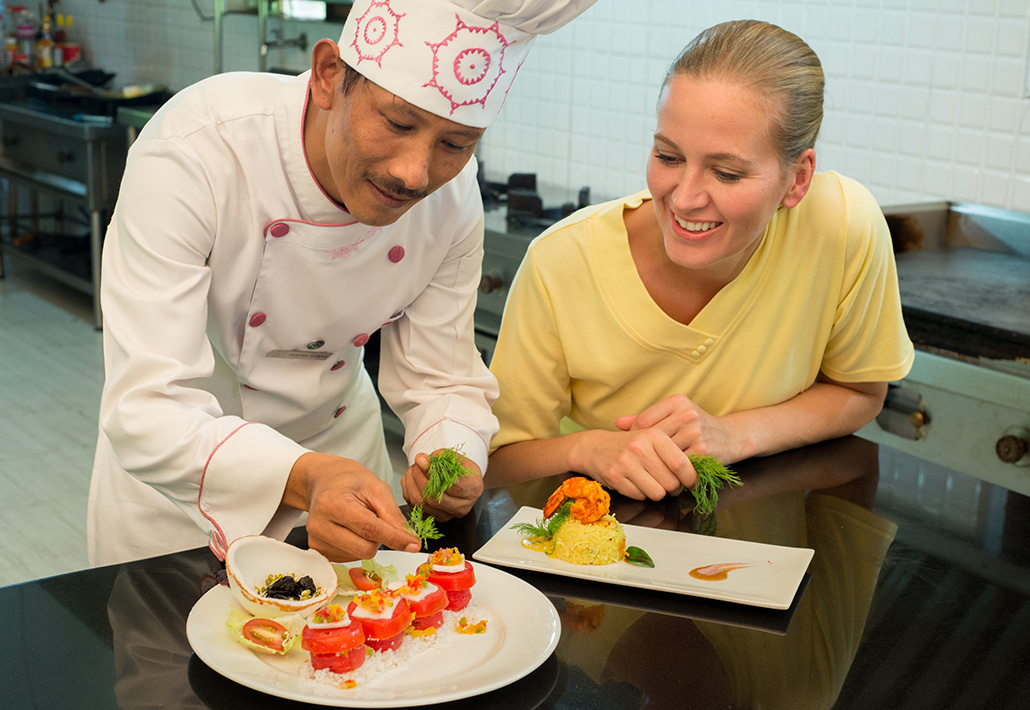 There is no better way to enjoy a holiday than by combining some holistic relaxation with picking up a new skill in an informal, effortless and enjoyable way. In all our facilities, we are happy to offer this combination as part of our portfolio for discriminating guests.

The Indian table is a harmonious medley of many different traditions, a varied spread enhanced by huge regional differences and specialities. In general, Central India, the hottest part of the country, makes most use of the fiery flavours often associated with Indian food, but the South, traditionally a rice-eating area, has always favoured milder and vegetarian dishes. Its western seaboard, Kerala, enjoys the fish, subtle spices and coconut indigenous to the area, and these ingredients were supplemented by tastes from the middle east and further west, that arrived with the traders who sailed into Kerala’s bustling ports. The North, on the other hand, has always had more of a wheat and bread cuisine and eaten more meat, largely a legacy of its contact with countries to the west, such as Afghanistan. In the east, fish was again a staple in the coastal menus of Bengal and Orissa.

Another potent influence on north Indian cuisine was ancient Persia, whose eating habits first arrived in the ninth century, as immigrant Parsi communities landed in Gujarat. Well-established as successful traders, the Parsis moved down to Bombay in the late eighteenth century to shape the civic development and renowned gastronomic reputation of that great metropolis. Their milder flavours made Parsi restaurants the favourite haunt of the Europeans who flocked to the vibrant city. A more elaborate, more courtly Persian cuisine also flowered in north India with the dominance of the Mughal dynasty, whose two hundred years of culinary influence has left an indelible flavour to much of the northern dinner table. Royal preferences were also felt further north in Kashmir, where the Mughal court decamped in the hot summer months; these mingled with the region’s unique menu that reflects its native Sufi faith. This featured more use of vegetables and simple, less spiced food, along with the fresh fruits and nuts that grow so abundantly in the valley. These were also dried and used over the long, often snow-bound winters. The most recent course in the communal Indian banquet was provided by the British. They introduced their favourite dishes first to Calcutta, the old imperial capital, and then passed them on to the Anglo-Indian communities, who were largely responsible for running and staffing the national railway system. As a result, Raj cuisine travelled the length and breadth of its adopted country with ease and speed, to become a staple ingredient in the feast that is Indian gastronomy.

In our culinary education, we like to start at the beginning, by tracing the journey your food takes from farm to feast, source to sauce. So whether you are staying with us in coastal Kerala or mountainous Kashmir, as our guests you will come into contact with the real people that make up the local agricultural economy, be it spices, fish or apricots, and the vibrant local markets where produce is distributed. This way you will gain a rounded appreciation of everything that lies behind the arrival of the plate on your table.

Cooking Classes with our resident expert chefs can be booked the evening before at the Reception and will take place each afternoon. The dishes being taught will vary each day depending on the seasonal availability of the ingredients and will give you a unique and authentic cooking skill to take home, along with a booklet of the recipes you have mastered. Each Nourishing Retreat is a bespoke programme, lasting for between 4 and 6 days, with the details arranged according to your wishes.

As Kerala is India’s spice garden, visits will be made to the beautiful hill stations where tea, coffee and fragrant spices are grown, and the local centres of distribution will also be visited.

Whilst in the hotel, a paradise garden overlooking the Arabian sea, Cooking Classes with our resident expert chefs will take place in the main kitchen, adjacent to the iconic Annapurna Dining Room, designed on the model of a light and airy Keralan longhouse. They will run from 3 – 4 pm.

Part of the Hermitage retreat package with feature a two-night cruise on the hotel’s houseboat Lotus, built and maintained to the same impeccable standard as the hotel itself. During the cruise, we buy fresh fish each morning from the local fishermen who come to the boat, and we generally offer cooking lessons on the sundeck in the evening around 5 pm. while the boat is gliding through the constantly changing scenery of the tranquil backwaters fanned by the delightful light evening breeze. Guests then enjoy the freshly prepared food for dinner on the deck, under the twinkling stars.

The adventure begins as you go with the cook to buy vegetables from the early morning floating market that serves the modern city of Shrinagar while still working on the ancient barter system. We will also buy freshly caught fish from the shores of the lake and visit a local house run by a charming family to learn the secrets of traditional family recipes and local dishes.

During your stay in Sukoon, you can book a cookery lesson a night before with Reception, and the classes are generally conducted in the late afternoon as the sun sets gracefully over the beautiful Dal lake dotted with local shikhara boats and overlooked by the majestic Himalayan peaks. The freshly cooked delicacies become your delicious dinner.

The holiday then moves on to the Sukoon Safari Camp, set amidst green clearings fringed by forests of deodar, the Himalayan pine. On the way to the camp, we will visit local trout farms to pick the fish for the evening meal. Before spending the night in luxury tents, the Cooking Class takes place over crackling wood fires, whose fugitive flames give tantalising glimpses of the stunning mountain panorama that surrounds the camp.

From 2022, this hidden retreat will function as the nourishing heart of ABChapri Retreats in Kashmir. Built in sylvan isolation only reached by a winding scenic road and a short walk, the complex sits amidst grounds that have been purposefully left undisturbed to encourage the abundant wildlife of the area. Not one tree was felled in the construction of the site. Nourished by natural spring water, the retreat will have organic gardens where our guests can select and pick vegetables and local herbs to accompany fish bought from fishermen on the shores of the lake below. Poultry and eggs will come from the nearby local village, where our own cows are tended. All of this will generate local employment in an area whose traditional economy has been hard hit by recent developments.

Nearest Airport: Kannur, (daily flights from Delhi, Mumbai, Hyderabad, Kochi, Bangalore) then a 90 min transfer to the hotel in one of our cars.
Nearest Railway Station: Nileshwar, 6kms from the hotel.
From Bangalore: Distance by road is 360 kms, a 7/ 8 hour drive (including stops) through the breathtaking scenery of the Western Ghats, surrounded by gentle hillside slopes with tea and coffee gardens, spice plantations and virgin forests. 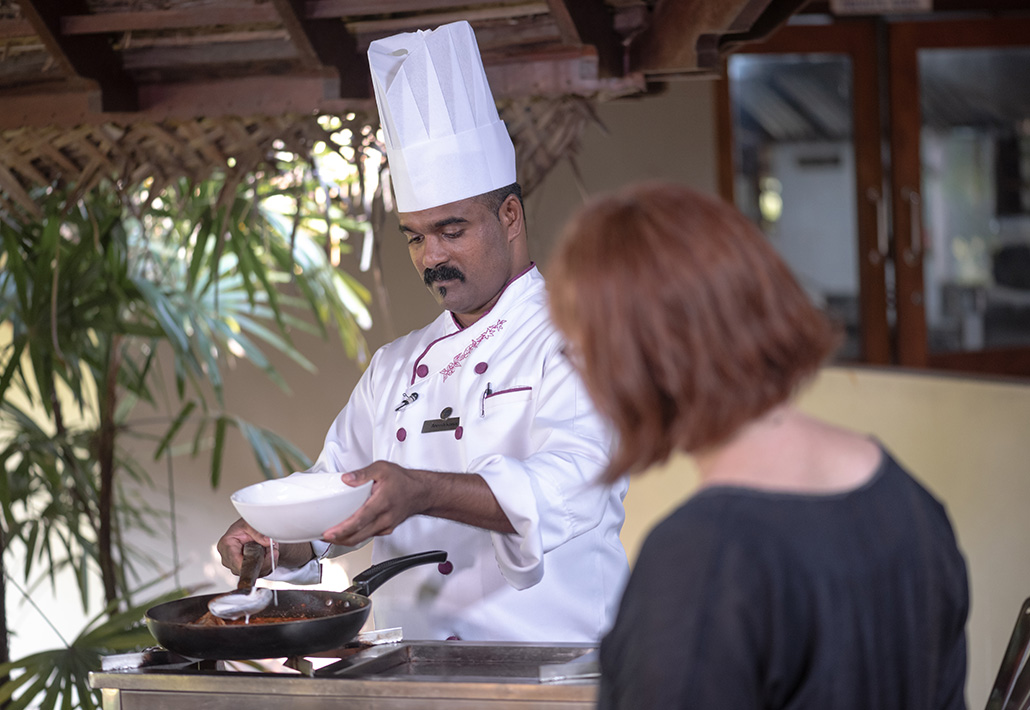 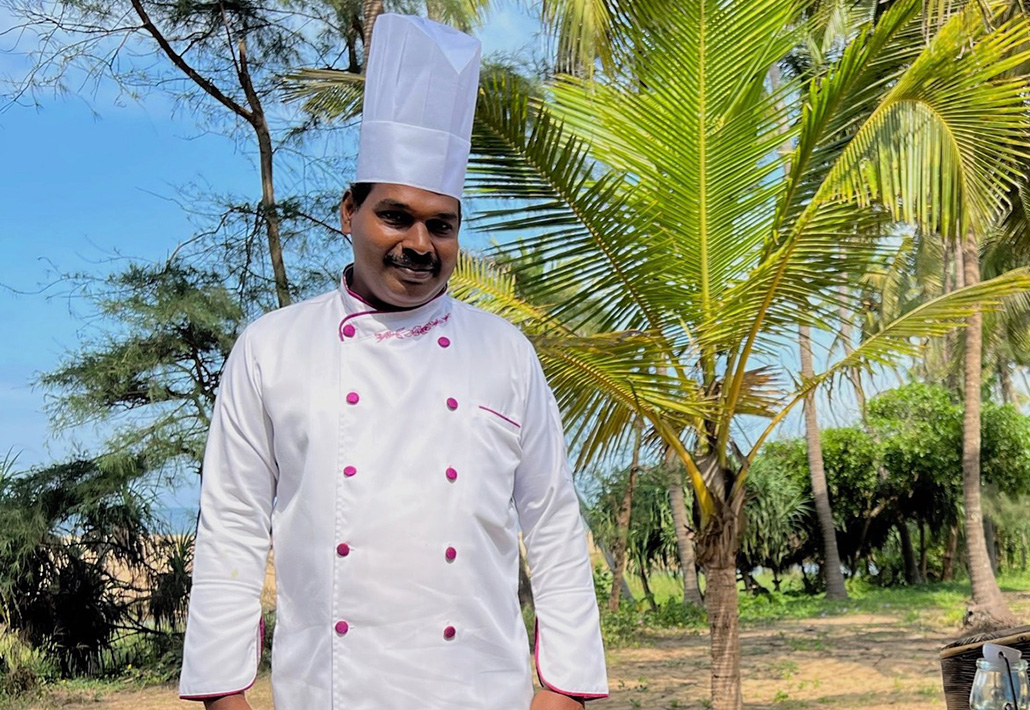 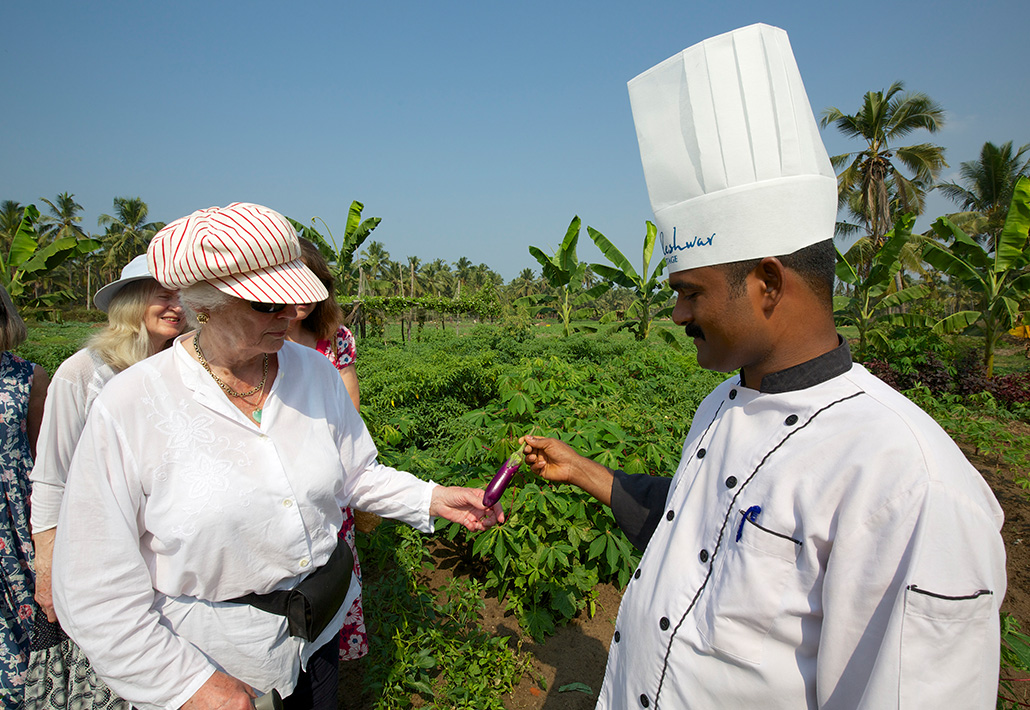 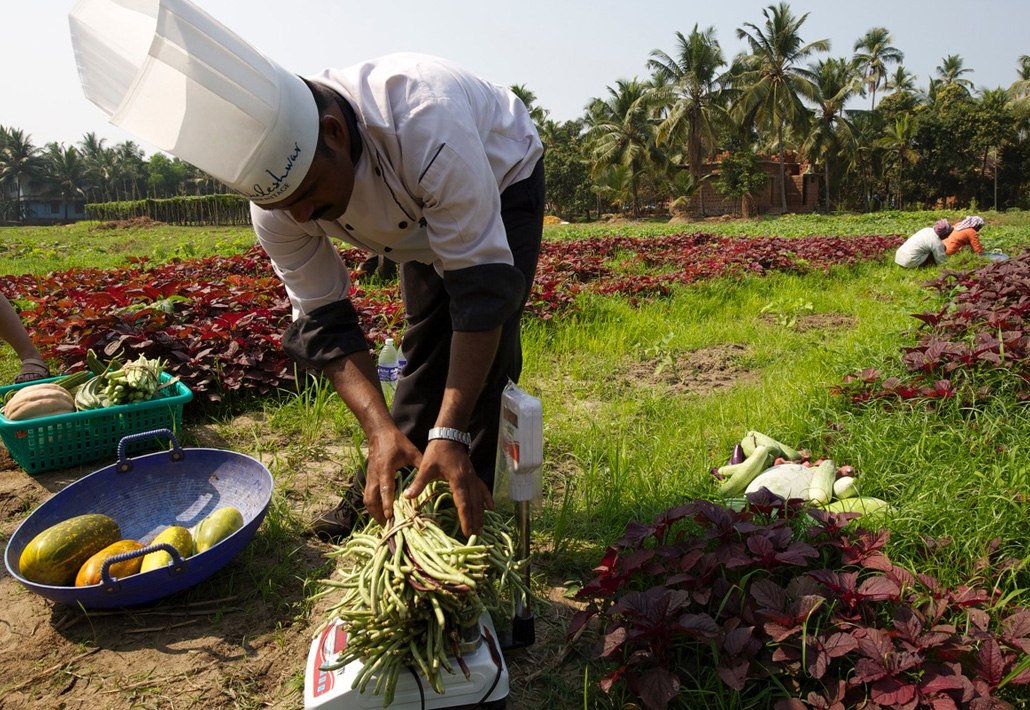 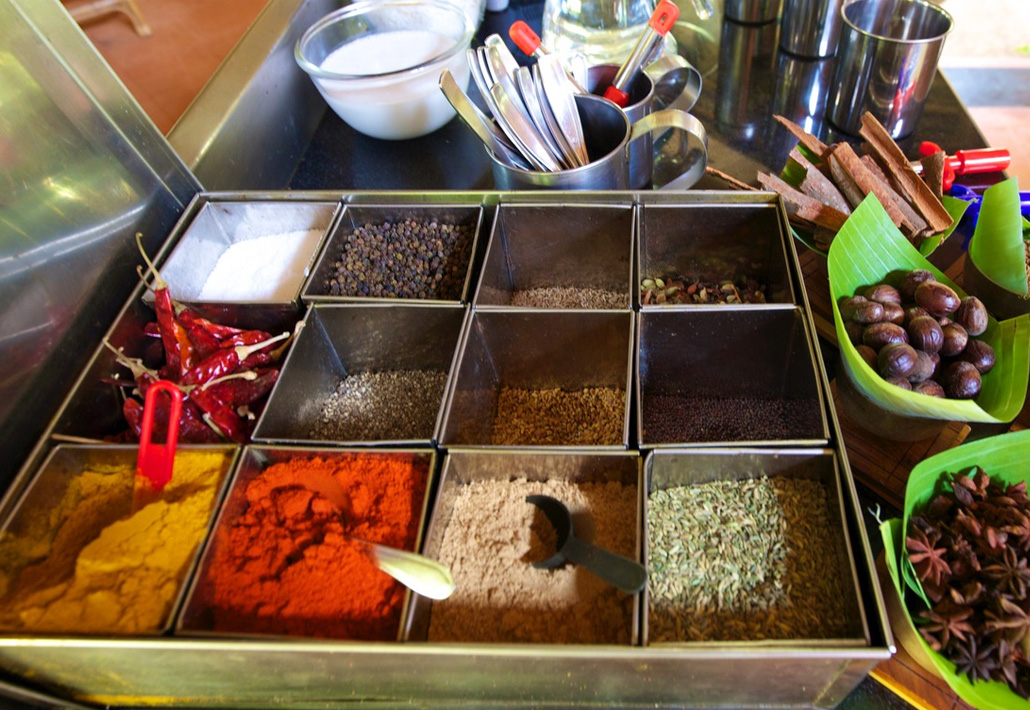 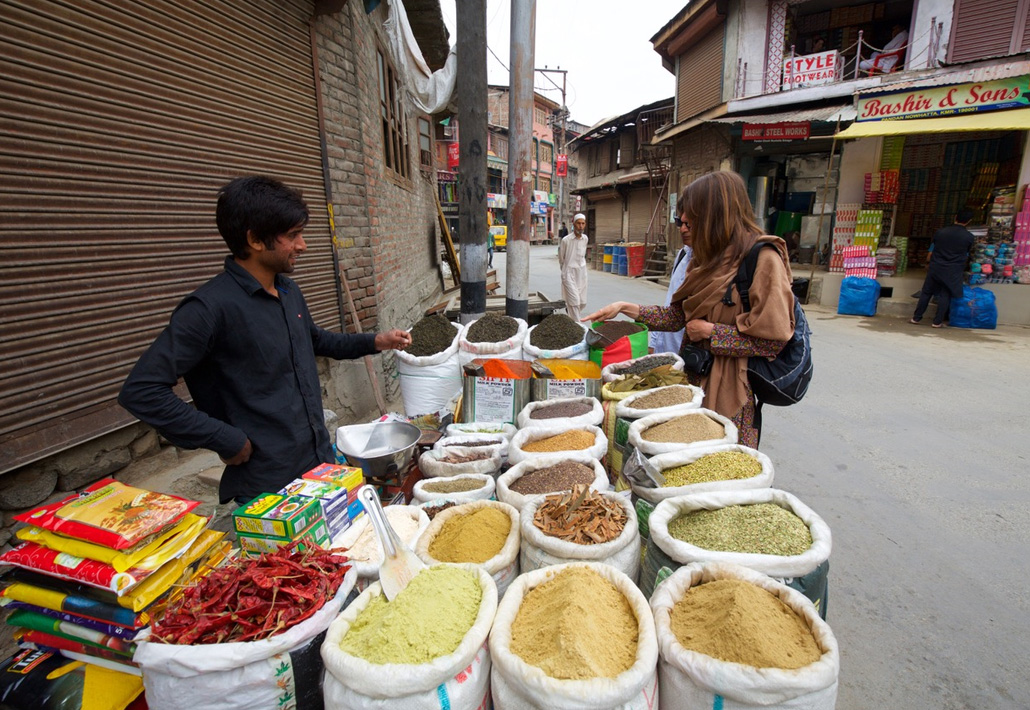 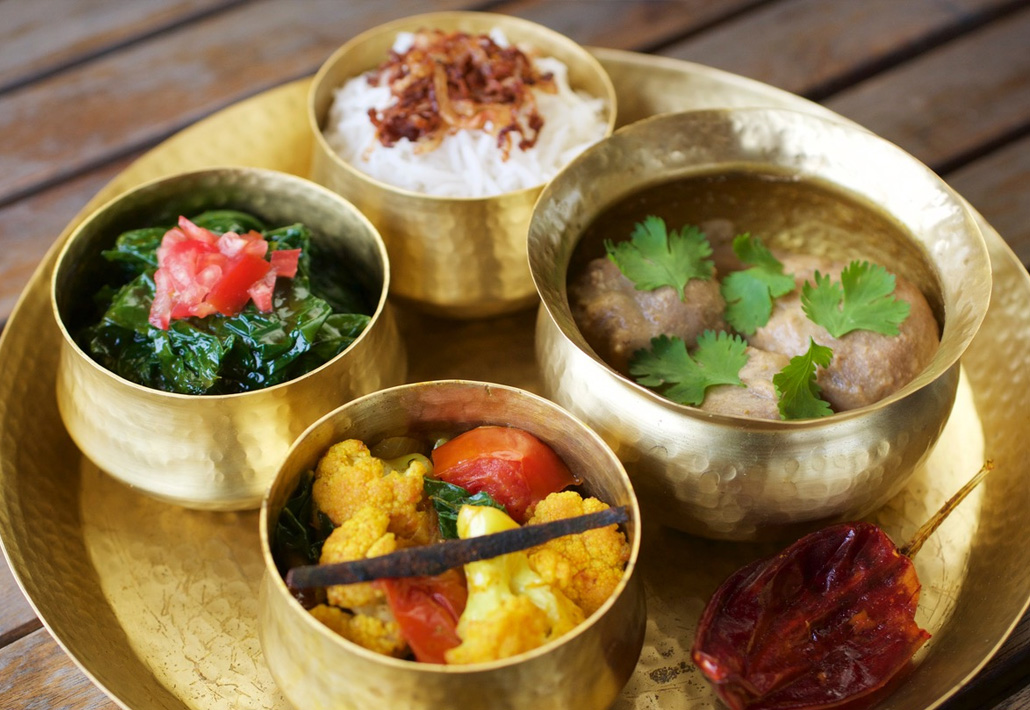 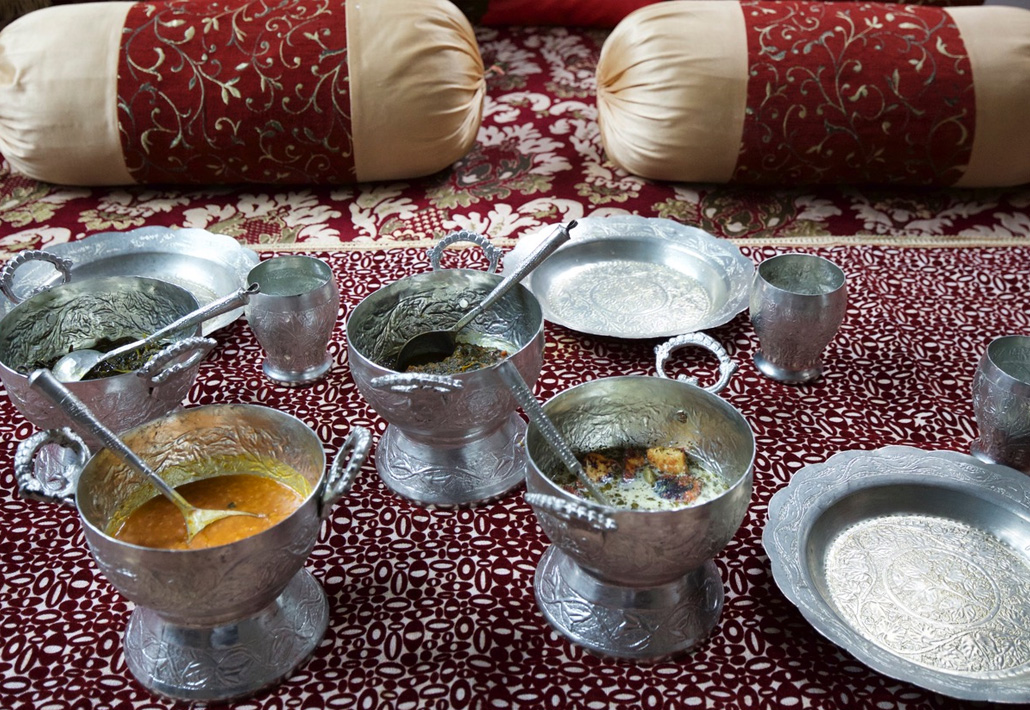